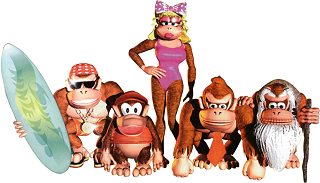 In many cartoon TV shows, films, and video games, the female animal characters may be drawn more obviously anthropomorphic than the male animals.

The males will look like cute cartoony critters or real animals, while the females will have curvaceous, more humanoid body shapes. They may come complete with Hartman Hips and/or Non-Mammal Mammaries. Frequently, females will be the only ones to have human-like hair, often long and flowing.

There may be a reasonable purpose for this: Humans are much more visually oriented than many other animals (except most birds), and these features are the most obvious visual cues for humans in telling female humans from males. Other species may have different visual cues, but what's the use in expecting the audience to recognize them? And what else could you do to distinguish that your animal character is female? Just give them boobs, hips and makeup, and call it a day.

It is worth noting, perhaps, that facial hair is probably the one mostly male-exclusive attribute used for such characters, this being one clue of masculinity that is not hidden by clothing.

(Then again, this might be done for some other reasons, though it is hard to imagine what they might be...)

In other words, the female animals tend to be at least a half-notch closer to the "human" end of the Sliding Scale of Anthropomorphism than the male animals, to the point of looking like outright Beast Men compared to their male equivalents. Because of this, they are rarely ever depicted as Accessory-Wearing Cartoon Animals or Half-Dressed Cartoon Animals; see Pantsless Males, Fully-Dressed Females.

This trope applies only to characters based on actual known species. Aliens, monsters and mythical beings can have Bizarre Alien Biology, after all.

Sexy Dimorphism is a related concept for fantasy races. See also Men Are Generic, Women Are Special; Cute Monster Girl; Humanoid Animals, and — of course — Cat Girl. Subtrope of Bizarre Sexual Dimorphism. Furry Female Mane is a subtrope of this. Adults Are More Anthropomorphic is similar, but with age instead of gender.