Film / Alvin and the Chipmunks 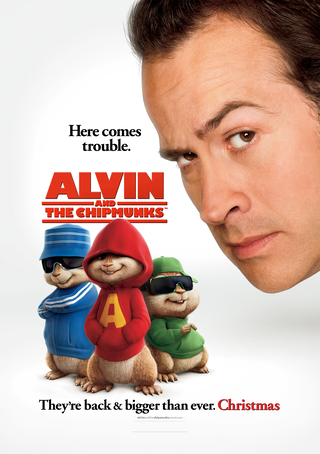 Get your Munk on!
Advertisement:

Alvin and the Chipmunks is a series of live-action films based on the musically gifted trio of chipmunks, the first one written by Will McRobb and Chris Viscardi of The Adventures of Pete & Pete and KaBlam! fame.

The first film, simply titled Alvin and the Chipmunks, was released in 2007, and was a typical origin story. In it, three somewhat humanoid chipmunk brothers — hot-headed Alvin (voiced by Justin Long), brainy Simon (Matthew Gray Gubler) and portly Theodore (Jesse Mc Cartney) — end up in LA after their tree of residence is cut down and driven there en route to becoming a Christmas tree. They stow away in the basket of struggling songwriter Dave Saville (My Name Is Earl's Jason Lee), and he promptly kicks them out of the house after finding them... only to let them back in after hearing the three singing outside. Dave strikes a deal with the youngsters: they sing his songs, and he lets them stay in his house.

The Chipmunks become a smash pop group and Dave is not so down on his luck anymore, but their greedy record executive, Ian Hawke (Arrested Development's David Cross), schemes to have the chipmunks all for himself by enticing them with expensive gifts. Can the chipmunks resist Ian's temptations, will Dave be able to rekindle his relationship with ex-girlfriend Claire, and most importantly, will Dave and the chipmunks learn the importance of family?

Although it was met with less than enthusiastic reviews, the first film was a surprise hit, taking in an impressive $359 million on a budget of merely $60 million. Even though he wasn't thrilled with the movie, Roger Ebert remarked — à la his review of the first Teenage Mutant Ninja Turtles movie — that it was "about as good as a movie with these characters can probably be" and that it might've done "something satirical about rock stars and the hype machine." Either way, the movie helped reinvigorate interest in the characters. Obviously, the money made with this movie would make a sequel a sure thing, right?

Fast forward to the very end of 2009, where Alvin and the Chipmunks: The Squeakquel opened on Christmas Day to robust grosses despite lots of popular competition such as James Cameron's Avatar, Sherlock Holmes (2009) and The Princess and the Frog. After a concert accident results in Dave in traction and sent to the hospital, in the Chipmunks end up in the care of Dave's lazy cousin Toby (Zachary Levi) and they are enrolled in school and must try to fit in with their human peers, a struggle made even tougher since they were former celebrities. Meanwhile, Ian, struggling to get back on his feet after losing his wealth and reputation in the end of the first movie, seems to have finally found replacements for his former employees in the form of the Chipette sisters: brash Brittany (Christina Applegate), brainy Jeanette (Anna Faris), and portly Eleanor (Amy Poehler). Just like the three male chipmunks, the Chipettes are somewhat humanoid, and as such are capable of human speech and, by extension, singing. Can the Chipettes be just as successful, and will vengeance on the Chipmunks finally be Ian's?

As the Squeakquel did well for itself, the third film was released at the end of 2011 and entitled Alvin and the Chipmunks: Chipwrecked. Oh yes, really. The Chipmunks and Chipettes go on a cruise and get shipwrecked. Like the first two, it wasn't well-received by critics, but it was a modest box office success. A fourth movie (subtitled The Road Chip) was released on December 18, 2015, the same date as The Force Awakens, to adequate box office numbers and negative reviews, though it is receiving a splendid (if mostly ironic) cult-following.

NOTE: Tropes under here are specifically for the live action/CGI movies.

The Alvin and the Chipmunks movies provide examples of:

Dave comes upon Alvin showering in the dishwasher.

Dave comes upon Alvin showering in the dishwasher.