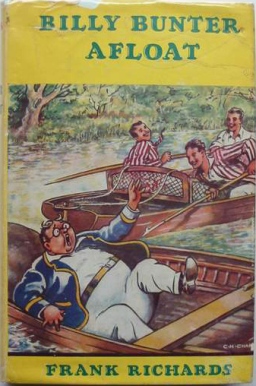 It's funny because he is in desperate need of help!
"Let me look through this stack of comics and see if I can find a situation that didn't involve her breaking the laws of nature with her mass and then crying. OK, this is the best I could do: In the history of Little Archie comics, the only positive experience the fat character had was when her impossible mass broke through a dock and knocked out a lake of fish."
— Seanbaby, "8 Bizarre Horrors Found in the Squarest Comic Book Ever"

It seems that whenever there's a gang of lead characters in comedies, children's media, and sitcoms, there's always one person that's fatter than the rest of the cast. Usually male, and they'll almost always be the Butt-Monkey/Chew Toy/Plucky Comic Relief - often, though not always, through their Big Eater and/or Gasshole tendencies. When the Fat Comic Relief is of the Big Eater variety, their comedic scenes often involve food; such as eating all the food meant for everyone else, and/or being Obsessed with Food even in situations where they should instead be focusing on something else at the moment. Gasshole Fat Comic Reliefs tend to be Fat Slobs. If you have both flavors of this trope together, this character is very likely to often be Too Hungry to Be Polite.

Keep in mind that just because a character is both fat and a Butt-Monkey, that does not mean they apply for this trope. Butt Monkeys can be played straight or for sympathy, in which case they are not seen as Acceptable Targets, and so do not qualify. Additionally, their status as a Plucky Comic Relief or Butt-Monkey must be related in some way to their fatness. For example, a Butt-Monkey who is picked on because he is fat would qualify (if Played for Laughs), but a Butt-Monkey who is picked on for some unrelated reason (such as for being a Nerd) without consideration for their weight would not.

Sister Trope to Fat Idiot. This character is often the Fat Best Friend. You'll often find these kids gobbling up the ammo of a Food Fight. If the series takes place in school, expect them to be the most frequent target of The Bully. See also Big Fun.

Hard to take the overweight Kruller seriously when he can't even do a proper combat roll.

Hard to take the overweight Kruller seriously when he can't even do a proper combat roll.