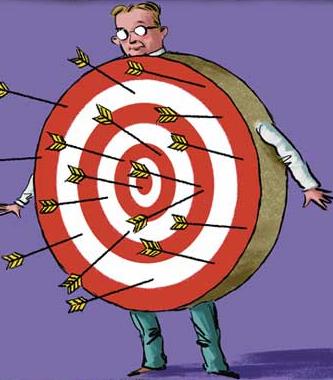 "I love hitmen. No matter what you do to them you don't feel bad."
— Marv, Sin City
Advertisement:

Which groups are okay to ridicule, and which ones are not? This can vary by a lot from year to year, from culture to culture, from subculture to subculture, and so on: If a group is listed here, it does not mean that the group is universally considered an acceptable target, and it most definitely doesn't mean that the group should be targeted. While these lists might contain some truly legitimate targets, they are on the most part lists of prejudice - real as well as interpreted. In fact, Acceptable Targets are nasty consequences of the stereotypes that flow in our society.

It's also worth noting that in general, most countries have a particular part or nearby country that they mock. For instance, the French usually mock the Americans, while United States locals love to mock the French. The English, Canadians, Australians, and New Zealanders each persist in claiming that the other country has a tradition of sodomizing sheep, as well as overall national bigotry. There's no particular reason for this, other than thousands of years of wars. And, of course, the fact that the sheep are apparently sluts. The sheep thing shows up between the Scots, Welsh, and northern English and in Italy between continental Italians and Sardinians, too. When in doubt, of course, one can always go for the Russians, who are still depicted as shadowy villains despite the Cold War having ended decades ago (though since the invasion of Crimea, it seems to be more or less back).

And as is shown by the huge number of groups listed on the pages below, pretty much ANY person in the world is someone's possible Acceptable Target. It should also be noted that each of these groups are also someone's Unacceptable Target. That a group is listed here does NOT automatically mean that it should be an acceptable target, nor that it should not be: most people can agree that many groups on this list are victims of prejudice and undue ridicule, while other groups may very well deserve what they get. This is NOT a consensus about which groups are okay to mock but rather a list of how various media portray certain groups. Also note that examples are added by all kinds of people and for all kinds of reasons. No consensus will be expressed on these pages.

Compare Fair for Its Day for Values Dissonance on what was an acceptable target; Klingon Scientists Get No Respect, where the target does a valuable job for their Planet of Hats, but gets no respect because they don't wear the standard hat. See also Loser Protagonist.