Klingon Scientists Get No Respect 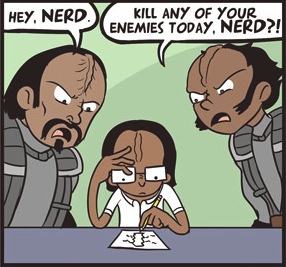 And what kind of Klingon wears glasses, nerd?
"Kurak was a warp field specialist on the Klingon homeworld. I don't think Klingons regard scientists very highly... she always seemed a little defensive."
— Dr. Beverly Crusher, Star Trek: The Next Generation, "Suspicions"
Advertisement:

The people of the Planet of Hats can adopt any of a thousand different hats as the one that their society values above all others. However, someone has to put on the "hat-maker" hat for the rest of the society to be able to wear their chosen hat. After all, Klingon warriors will need scientists to design their weapons and starships. (The possibility that someone can be both a warrior and a scientist doesn't seem to come up much.) Yet, despite making the Planet of Hats possible, the Klingon scientists get no respect because they aren't on the battlefield swinging a bat'leth.

It's not just a case of where someone takes on a thankless job because Someone Has to Do It, this trope is about culture. The Klingon Scientist is ostracized for having talents outside of what is approved by the culture, even though their talents allow their culture to function. Klingon scientists might even agree with Klingon values — although their combination of vital importance and low social status would certainly lead to Jade-Colored Glasses.

This trope can be expressed a lot of ways. A warrior culture may disdain the blacksmiths who make their weapons. A society of pure thinkers may consider all engineers to be menial laborers putting their high thoughts to work. A culture of traders may scoff at the farmers and artisans who make the goods that they buy and sell. A people of artists could see those who produce their art materials as unskilled proles. A race of clergy may look down on the builders of their houses of worship. And yes, a race of scientists could even look down on the brutish military who keep their society safe. The low-status communities in question might despise the mainstream right back, but, again, they might not, and all of them probably need people who get rid of trash and keep the environment clean. If this trope is part of An Aesop, then Vetinari Job Security will kick in when the oppressed Hat-Maker takes a holiday.

A Fantastic Caste System may play this straight or avert it, depending on ideology. Some more idealistic caste systems value (or claim to value) anyone who devotedly fulfills their ordained role, whether that means being a great artist or a great street-sweeper — just don't try to be something you're not. Others clearly place the castes in a hierarchy: not only are warriors in general better than merchants, the worst warrior is better than the best merchant, simply by lucky accident of birth.

Compare to Hard on Soft Science, where certain fields of study are mocked by more "serious" areas that may very well be connected or derived from them. Compare and contrast Cultural Rebel.

In the real world, this is fairly common, especially in premodern times. Universities, for example, were started largely with the aim of studying theology, with the natural sciences being a vaguely complementary supplement. Craftsmen were seen as inferior to farmers, as unlike farmers they merely "reworked" what farmers produced. Merchants were largely considered inferior to everyone since they were seen as producing nothing and making profit. This stigma was, in fact, one barrier to industrialization in many places, since the classes with the most potential to produce productivity gains were socially discouraged. While this has subsided, to a large extent, it is still enough to say that every society has had at least one job that is looked down upon by the culture at large while still being entirely necessary for that society to function.

open/close all folders
Star Trek
Despite being the Trope Namers, Klingons are rarely portrayed this way. While they're a Proud Warrior Race, they recognize the value of different types of work to their society. Some Klingons make an effort to further avert this, or simply to incorporate the concepts that underlie Klingon society, by describing what they do in battle-like terms:

In fact, it's common for humans in Star Trek to expect Klingons to act this way - often getting disabused of the notion:

There are a couple of genuine examples, though, Depending on the Writer:

Non-Klingon alien species in Star Trek, however, tend to play this trope straight much more often: