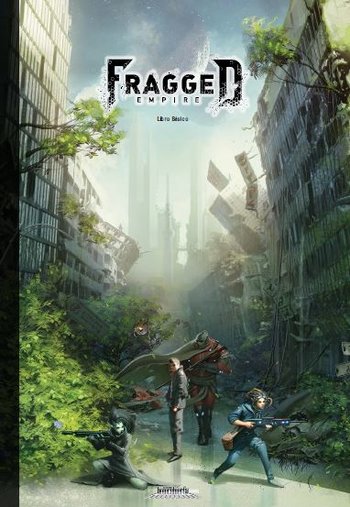 Betrayed by your creators, you are a genetically engineered remnant, emerging from the ruin of genocidal war…
Advertisement:

is a Tabletop RPG created by Wade Dyer and published by Design Ministries. It was successfully Kickstarted in 2014 and released the following year.

Over 10,000 years ago, Humanity went extinct after reaching a point of social, technological, and genetic stagnation. Before we died out, we created our child race: The Archons. The Archons mastered genetic engineering and began populating the galaxy with thousands of newly created races that served as children, pets, servants, or mistakes to be pushed to the backwater corners of the empire and forgotten.

In their pursuit of genetic perfection, the Archons created twelve "perfect beings": the X'ion. But when the Archons decided that the X'ion were actually a mistake and began killing them, one X'ion managed to escape into the deepest reaches of unexplored space.

X'ion returned 200 years later, bringing with it its own bioengineered warrior races: The Nephilim. X'ion had one goal; to destroy the Archons in revenge for being created only to be destroyed. The Archons created new warrior races such as the Legion in retaliation in order to defend themselves.

Six years after it reappeared, X'ion had successfully eradicated the enitre Archon race. Its work done, X'ion abandoned the Nephilim and returned to deep space.

In the wake of the end of the war, the abandoned races saw no reason to continue fighting. What followed was a century of darkness as the various creations of the Archons and X'ion crawled out of the wreckage, attempting to rebuild their societies among the ruins. Or, in the case of the warrior races, create their own societies from scratch.

It took these hundred years for most of the races in the galaxy to rediscover interplanetary travel, and it has only been about five years since they've all met in a post-war situation. Faced with no other option, they are attempting to put aside bad blood and band together for survival. Because no single one of them can survive on their own, and nobody knows where these new societies are heading.

They need each other, whether they like it or not. The galaxy is full of abandoned bioweapons, autonomous death machines left over from the war, and space stations and colonies full of technology nobody really understands. And if they do not hang together in the face of the unknown and the remnants of the Great War, then they will most assuredly hang separately.

It's a crunchy rules tactical RPG set "post-post apocalypse". It explores the relationship between:

Fragged Empire currently has two supplements: the Antagonists Archive I, which is full of Non Player Characters, places to go experience violence, and major organizations to run afoul of; and the Protagonists Archive I, which has a ton of new PC options including four new races. In addition, Wade developed three further setting books that use Fragged Empire as a core:

Fragged Aeterneum is the world's first Soulsbourne RPG, where the characters are immortal respawning defenders of an infinite gothic city. The focus is on melee combat, and Total Party Kills are not only expected, they're accounted for in the rules.

Fragged Seas is about pirates in a Chthuhlu-esque world. It has rules for dark-god-powered magic, naval battles, as well as more involved trading rules.

Fragged Kingdom is a science-fantasy RPG about exploration and kingdom building. It works off the "this fantasy world is actually the distant future of a super-high-tech society that collapsed aeons ago, and all the magic is actually old technology" trope, only the society that collapsed is Fragged Empire. Most of the Haven races are still around, only now they (you) get to create your own settlement.

A second edition was successfully kickstarted in 2022.