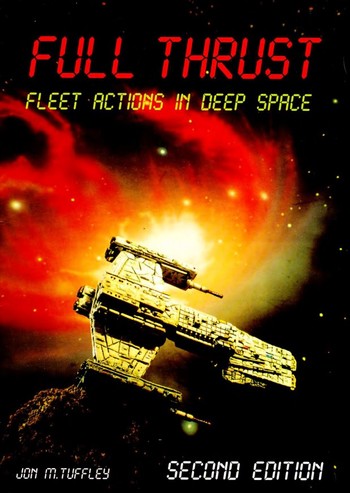 Full Thrust is a starship miniatures combat game produced by Ground Zero Games in the UK. Like GZG's other two miniatures games, Dirtside II and Star Grunt II, it is designed to be a generic system, capable of handling whatever miniatures the players happen to have and leaving much of its techobabble vague enough to be used with whatever sci-fi universe the players wish; conversions exist for Star Wars, Star Trek, and Babylon 5, among others. In addition, GZG has a universe shared by its three miniatures games, sometimes called GZG-verse or Tuffleyverse after GZG's principal developer, John Tuffley.
Advertisement:

Full Thrust gameplay tends to be fast-paced and the rules are fairly simple and straightforward. One distinguishing feature is that each player secretly writes out movement orders for his/her ships at the beginning of each turn, which forces the players to try to predict their opponents' moves. The ratio of ship durability to weapon damage makes the game unforgiving of tactical blunders. The rules are available as free .pdf downloads from GZG's website, http://www.groundzerogames.net

The factions of the Tuffleyverse can be divided into the 'initial group,' made up of the four powers that took part in the 'Third Solar War' and were introduced with the initial publicaiton of the game, and the later additions, most of which are second-tier and minor powers (the exception being the United Nations Space Command, which is effectively a fifth major power). Three alien races (the Kra'Vak, Phalons, and Sa'Vasku) have also been introduced as major powers in their own rights, each with their own unique technology sets but still mostly following the same core mechanics.