What a Piece of Junk 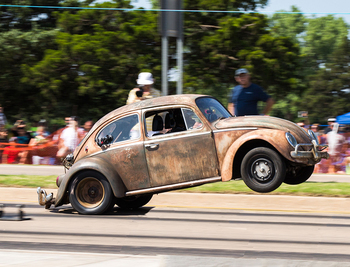 For a little old car, Herbie's got some 'oomph' left in him!
"She may not look like much, but she's got it where it counts, kid."
— Han Solo, A New Hope, on the Millennium Falcon.
Advertisement:

This is your car? This is a pathetic rusted-out bucket of bolts! I'm sorry, what exactly makes you think this thing will get us three blocks before collapsing in a big puff of blue smoke? I've seen cars crushed into cubes that were still more impressive-looking than yours... did we just overtake a Lamborghini

If The Alleged Car is unjustly accused of being a working vehicle, What A Piece of Junk is unjustly accused of being The Alleged Car. It looks like a clunker, but performs like a Cool Car, likely through much work turning into an Ace Custom. This is a vehicle that looks like it will fall apart if you go faster than twenty miles an hour. Your friends won't ride in it for fear of it spontaneously combusting. Well, your eyes are deceiving you: get into it and watch it blast past the competition. It is much, much better than it looks.

It is not limited to cars or even vehicles — sometimes what looks like The Alleged Steed, if Took a Level in Badass, may actually be a Cool Horse in disguise.

Of course, as many of the examples will demonstrate, the vehicle will probably still be prone to breakdowns at inopportune moments. It can also be a result of Technology Marches On.

This Trope, like The Alleged Car, seriously depends on how benevolent traffic laws are in the show's universe (to say nothing about Real Life): if the car looks too battered to be street-legal, then chances are you may get pulled over and have the car impounded or even ordered to be destroyed — to not mention that some modifications may give you legal trouble, from being fined up to an automatic prison sentence (if it's something like concealed weapons or classified tech).

If The Hero has a vehicle that stands out for its dated design (and possibly for its performance) it is the Hero's Classic Car.

Polar opposite of this trope is the Rice Burner. Compare Lethal Joke Character, Excalibur in the Rust, Older Is Better, and Sentimental Shabbiness. Not related to It's All Junk. An example of Artistic License – Cars.