Literature / Halo: The Fall of Reach 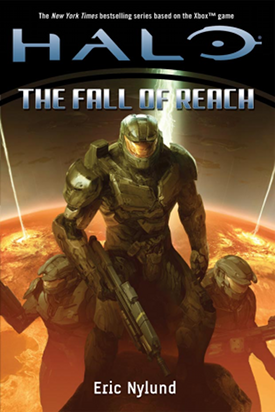 "The four Spartans that composed Blue Team covered his back, standing absolutely silent and immobile in their MJOLNIR combat armor. Someone had once commented that they looked like Greek war gods in the armor....but his Spartans were far more effective and ruthless than Homer's gods had ever been."
Advertisement:

Halo: The Fall of Reach is the first novel in the Halo series, and sets up the backbone of the franchise’s lore. It was written by Eric Nylund in 2001. Beginning several decades before Halo: Combat Evolved, the book explores the history of Spartan John-117 – later to become the Master Chief – and his rise through the ranks of the United Nations Space Command's (UNSC) Spartan-II program. Originally developed as an elite strike team to counter human Insurrectionists, the Spartans are transformed by First Contact and the subsequent war with the Covenant into humanity's greatest heroes, as they are the only group the UNSC can consistently rely on to get results in the war. The book follows John through a childhood immersed in military training, his struggles adjusting to his enhancements, the battles he fought on behalf of humanity, and his eventual acquisition of the MJOLNIR Powered Assault Armor.

It is notable that the book went from initial concept to final publication in the space of four months, with Nylund writing the final draft within six weeks of beginning the project. It has been suggested by many fans that the book is a good starting point for a movie adaptation – indeed, Stuart Beattie submitted a draft script and concept art based on the book once Peter Jackson’s project fell through. While a live-action version hasn't happened (yet), the novel has been adapted into both a comic series published by Marvel Comics and an animated series created by Sequence (the same studio behind the Halo 2: Anniversary and Halo 4 terminals).

The broad story details of this book have been adopted into the main Halo canon, with references popping up as early as Halo 2; the game Halo: Reach even takes place entirely on the titular planet. While Halo canon has evolved significantly since the original writing (not only has the actual Fall of Reach been elaborated upon far more by later media, but the novel itself was slightly rewritten in its 2010 and 2011 editions to make it mesh better with later canon), the core elements of the Spartan program and the characters depicted here are still vital to the mythology.