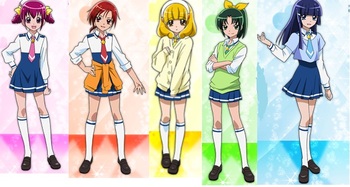 Characters who are meant to stand out in some way in a military, school or other place will wear a "uniform" that is different from everyone else. This is separate from rank although it may be implied that they're too badass for anyone to complain. Also different from a practical reason to be dressed different such as fireproof clothing for a pyrokinetic army. When somebody sympathetic is doing this and getting away with it, it's almost certainly a symptom of Mildly Military. In a non-mild military, it's a way of showing the character's contempt for regulations — probably marking them as an enormous asshole who's too connected to discipline, unless the army deserves contempt.

This may also be a reason for most cop shows to center on plainclothes detectives instead of uniform officers, as even high-ranking brass on the detective side only wear uniforms under specific circumstances. On the other hand, detectives in media tend to select "plain clothes" with enough similarities to be uniform, making them easily identifiable before they identify themselves, and justifying enough customization to reflect character traits and investigative style.

Compare Transfer Student Uniforms, where the character still stands out, but from wearing the uniform of a previous school or station, and Bling of War where a military uniform is impractically fancy. Also compare Non-Uniform Uniform, for modifications to a uniform that's still technically within the uniform's guidelines. For a specific variety of Custom Uniform where the differences are intended to point up the wearer's attractiveness, see Custom Uniform of Sexy.

Often the reason behind this is to get Distinctive Appearances for any characters of importance — in reality, the entire point of a uniform is so that everyone's equal and the same, which obviously has undesirable effects for a story's main characters. As a result, it's a common version of Flashy Protagonists, Bland Extras.