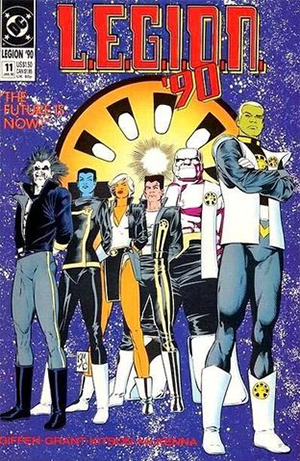 The L.E.G.I.O.N. before the Legion.
Advertisement:

In 1988 Keith Giffen, Bill Mantlo, and Todd Mc Farlane created a version of DC's Legion of Super-Heroes that rather than being stranded in or just traveling to the current century was native to it. The resulting team was L.E.G.I.O.N. (Licensed Extra-Governmental Interstellar Operatives Network) and was largely comprised of ancestors of the original team. The team first appeared in Invasion! before getting its own series which lasted for seventy-three issues from 1989 to 1993.

Vril Dox II joined up with other escapees from Starlag to create an intergalactic peace keeping force to step in where the Green Lanterns and Darkstars were ineffective or unavailable for a small segment of the universe. The team was eventually taken over by Vril's genius son Lyrl who had more self-centered interests and was so young he hadn't had much chance to develop a sense of morality. Lyrl outlawed those members he couldn't bring under mind control. The ousted heroic members formed R.E.B.E.L.S. (Revolutionary Elite Brigade to Eradicate L.E.G.I.O.N. Supremacy) to fight and regain their old team.

Years later, L.E.G.I.O.N. was again taken over for nefarious purposes though this time it took more work to discover just who was behind the attack, and Vril reformed R.E.B.E.L.S. to take on the new mysterious interloper.

Not to be confused with Legion (Marvel Comics), the son of Professor Charles Xavier.