Never Given a Name 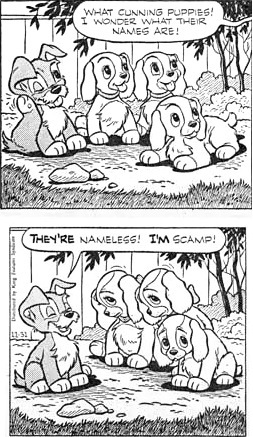 This trope is about a character who usually has some nickname, serial number, or title they go by, but they're missing a birth name, and may even lack an adopted name. If someone with I Know Your True Name magic shows up, this character is immune to their powers. They were never given a "proper" name. Discovering this lack of naming is an important characterization moment. Any race with No Need for Names incorporates a lack of naming into their culture by their very nature. Abusive/Neglectful parents in other societies may 'forget' to name their child.

This is not about characters whose personal names are merely absent from the work; No Name Given addresses that concept. This trope is often, not always, followed by the other characters insisting on a name that fits. While a full Naming Ceremony is generally unlikely to happen, the nameless character may adopt a name that reflects their new life. Also possible is that the nameless character refuses the name given to them.

This is a subtrope to The Nameless, because the character didn't have a name, even if they are given a name later. Compare No Name Given, where the work doesn't reveal the character's name, although their parents presumably gave them one.