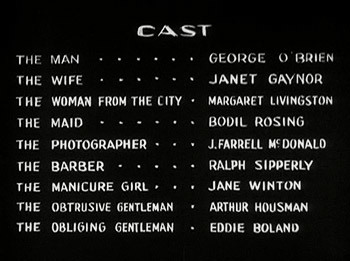 Who needs names? Plenty of stories, jokes, and even myths eschew them entirely in a Nameless Narrative. If a character is "named", it's more than likely to be as their role in the story or the job they have. Sometimes, the "name" might be a unique and prominent feature to them that serves as a reminder of their basic description, such as "the one eyed man", or "the silver haired maiden".

Stylistically, it's very economical in terms of prose and narrator memory (many Nameless Narratives come from the Oral Tradition) and at times elegant, distilling a character's essence down to their archetype.

The Nameless Narrative also works hand in hand with The Law of Conservation of Detail and Nominal Importance, allowing for a small named central cast and many nameless extras. This is usually because it's simply easier to remember the background characters this way than to give them all sprawling motivations and backstories.

May overlap with "Burly Detective" Syndrome (if descriptive epithets are used in place of names), Everyone Calls Him "Barkeep", No Name Given, The Nameless, The All-Concealing "I" and You Are Number 6. Often employs Spell My Name with a "The".