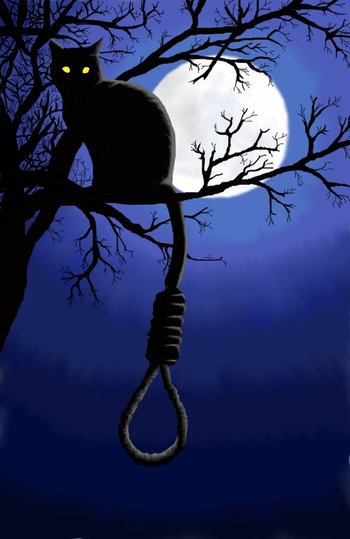 "Yet mad I am not...and very surely I do not dream."
Advertisement:

"The Black Cat" is one of Edgar Allan Poe's more famous short stories, first published in the August 1843 issue of The Saturday Evening Post.

We open the story with our narrator days away from being hanged for the brutal murder of his wife. He explains he doesn't expect us to believe anything we're about to hear from him.

The man says he used to be a fond lover of animals. He and his wife used to keep many pets, but his favorite of them all was a friendly black cat named Pluto. The man and his wife live happily and take good care of their animals, until one day the man suddenly turns to the bottle, eventually becoming a violent alcoholic. Coming home one night, he believes Pluto is avoiding him, so he snatches him up. In a panic, Pluto bites the man, who in turn gouges out one of his eyes with a knife.

From then on, the cat flees in terror at the sight of his master. Frustrated and angry, the man takes Pluto and hangs him from a tree in the garden. That night, his house mysteriously catches fire, and imprinted on the wall in ash is the image of the cat hung from the tree.

Some time later, the man runs across another cat, which is exactly the same size and shape as Pluto (it's even missing an eye), the only difference being this one has a patch of white on its chest. The man takes the cat home with him, but soon grows to hate it. It torments and tries to kill him several times, and the man realizes with horror the white fur is starting to take the shape of the gallows.

Enraged, the man takes an axe and tries to kill the creature, but is stopped by his wife, whom he kills instead. He hides her body in the walls of the house. When the police come to investigate, he's more than happy to realize that the cat seems to have vanished. However, right when the police are about to leave, they hear a yowling coming from the walls. Opening it up, the find the wife's body with the cat perched on her head.

The man accidentally walled up the cat with his wife.

This is one of Poe's more violent stories, a little shocking considering he loved cats himself. It isn't held in as such high regard as some of his more infamous works. Some scholars liken it to a mash-up between The Cask of Amontillado and The Tell-Tale Heart. Nevertheless, it is still respected and admired by readers and teachers alike.

Was adapted for film as one of the segments in Tales of Terror.

I had walled up the tropes within the tomb!