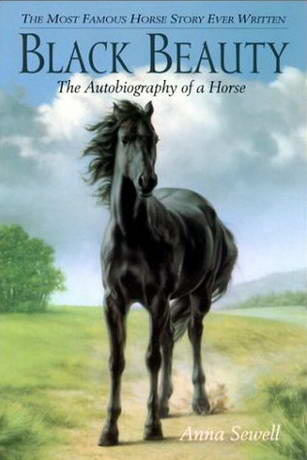 "There are a great many kinds of men; there are good, thoughtful men like our master, that any horse may be proud to serve; but there are bad, cruel men, who never ought to have a horse or dog to call their own. Beside, there are a great many foolish men, vain, ignorant, and careless, who never trouble themselves to think; these spoil more horses than all, just for want of sense; they don't mean it, but they do it for all that. I hope you will fall into good hands; but a horse never knows who may buy him, or who may drive him; it is all a chance for us, but still I say, do your best, wherever it is, and keep up your good name."
— Duchess, Black Beauty's mother, to her son.
Advertisement:

Black Beauty: His Grooms and Companions, the Autobiography of a Horse is an 1877 polemic novel by Anna Sewell, tracing the life of the titular fictional horse from colthood to retirement. Today it is considered a classic of children's literature; however, originally it was not written for children, but as an effort to draw attention to the wildly varying treatment of horses in Victorian England. As a result it contains mini-lectures on everything from bits and blinkers to broken knees. Along the way Beauty also provides a horse's perspective on the human capacity for cruelty and kindness, and comparisons between the treatment of animals and the treatment of poor working-class humans.

Many film and television adaptations have been made, with varying degrees of faithfulness to the original work.

This novel and its adaptations provide examples of: