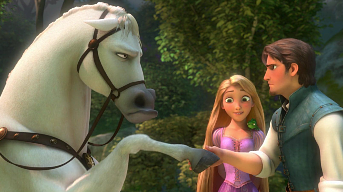 Maximus says neigh to this.
"He has little human hands... when he needs them."
— Simon Tofield on the protagonist of Simon's Cat, "Simon Draws: Simon's Cat

Ever notice in fictional works aimed at children, animals tend to have much more (or at least a little more) intelligence than they should? Well, in some cases, this can be done without having the creature walk on its hind legs or speak to humans.

Nearly Normal Animals don't talk to humans and are usually quadrupedal if they are that way in real life. They are very much animals, particularly when it comes to instincts, priorities and motivations and they very rarely, if ever, wear clothes. Like many Speech Impaired Animals and Talking Animals, Nearly Normal Animals lack hands and walk on all fours, negating the possibility of performing many human tasks and behaviors.

Largely Normal Animals (LNAs) clearly have thought processes and often human-level intelligence but don't talk freely with humans. These animal characters may talk to each other, either in their own language or in a human language, but either way, humans won't be able to hear them speak a human language. That is, unless they have the ability to hear what animals are saying. Their thought processes and personality is still very much like that of whatever animal they are. Many of them are able to make human-like arm and hand gestures and some can even grasp objects as if they have opposable thumbs. A few LNAs can sometimes act like the more anthropomorphic Civilized Animal or Funny Animal when required by a joke.

Mostly Normal Animals (MNAs) have clear thought processes as well as a few human and/or some or several doglike characteristics (greater frequency of uttering sounds, human-like expressions) that still don't detract from their animality. Unlike LNAs, they don't talk Animal Talk between species, only within their species. Their thought processes and personality is still very much like that of whatever animal they are. These animals usually don't go beyond being able to make human-like hand or arm gestures sometimes. They stay on all four legs if they are four-legged animals.

Almost Normal Animals (ANAs) have very few human and/or a few doglike characteristics (e.g., greater frequency of uttering sounds, human-like expressions) that don't detract from their animality, but they allow an audience not well versed in the way of animal behavior to understand what's going on in the animals' minds. Can be an honest mistake or completely intended. They don't make human-like arm or hand gestures and they stay on all four legs if they're four-legged animals.

This is the low end of the Sliding Scale of Anthropomorphism. The next step up is Speech-Impaired Animal. Below this is truly normal animals, which are not a trope.

Related to Amplified Animal Aptitude. LNAs are often but not always Intellectual Animals.