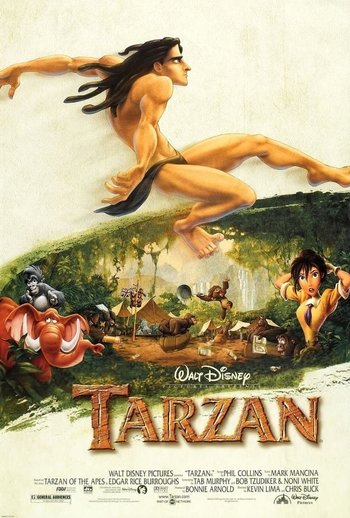 I want to know, can you show me?
I want to know about the strangers like me...
"Put your faith in what you most believe in
Two worlds, one family
Trust your heart, let faith decide
To guide these lives we see..."
Advertisement:

Tarzan, released in 1999, is the 37th film in the Disney Animated Canon and the tenth and final film in the Disney Renaissance.note A decade-long second golden age for Disney, spanning from The Little Mermaid to this film, marked by a return to producing and releasing critically and commercially successful films based on well-established works of literature following a perceived artistic and financial slump caused by Walt Disney's death in 1966. Based on Edgar Rice Burroughs' Tarzan series, it stars Tony Goldwyn as the eponymous hero, Minnie Driver as his Love Interest Jane, and BRIAN BLESSED as the antagonist, Clayton.note Blessed also provides Tarzan's signature yell. Phil Collins composed the songs.

The film opens in the late 1860snote or the late 1880s/early 1890s, as noted in the original novel, where an English couple and their infant son are the only survivors of a shipwreck off the coast of uncharted Darkest Africa. Using the remains of the ship, they build a new home in a large tree while they await rescue. At the same time, a gorilla named Kala and her mate Kerchak live peacefully with an infant child. The peace is soon shattered when their child is killed by the vicious leopard Sabor, and Kala is left devastated. Some time later, she hears a baby's cries and stumbles upon the now-abandoned treehouse. As she enters, she sees blood-covered paw prints and the dead parents, also the predator's victims. Action ensues and Kala saves the boy from Sabor. Kerchak despises the human for his appearance, but Kala decides to raise him anyway, naming him "Tarzan".

Tarzan grows up to become a strong, gorilla-like man, whose best friends are a tomboyish female gorilla named Terk and a neurotic elephant named Tantor (Rosie O'Donnell and Wayne Knight). One day, Sabor attacks the gorillas and is defeated by Tarzan, which earns him some respect from Kerchak. Then a British expedition team come to study gorillas appears, led by Professor Archimedes Q. Porter. His daughter Jane is attacked by baboons, surviving only after being rescued by Tarzan. Now Tarzan must decide where he belongs, and also prevent the trigger-happy hunter escort Clayton from ruining everything...

The film was followed by an animated series, The Legend of Tarzan, and two direct-to-video sequels, a compilation film titled Tarzan & Jane and an Interquel titled Tarzan II. The movie was even adapted into a short-lived Broadway musical.