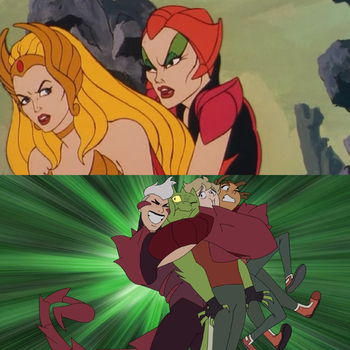 Scorpia: Killing you with hate in the 80s, killing you with kindness in the '10s.
This trope is when a character is made nicer (or at least a bit more sympathetic) in an adaptation than they were in the source material. For instance, a character who is a Jerkass in the source material becomes a Jerk with a Heart of Gold or even a Nice Guy in the adaptation of said material.
Advertisement:

While there may be some overlap with Adaptational Heroism, the key difference is that the character doesn't necessarily become heroic if they were villainous or neutral in the source material, and doesn't make them more heroic if they were heroic in the first place. Characters affected by this trope will generally stay on their respective alignments (whether good, evil or neutral), but they will become a bit more approachable in the adaptation.

Adaptational Sympathy, in which a villainous or disliked character is given a sympathetic backstory, may also overlap with this trope. One key difference, however, is that the character in question may not necessarily act nicer or behave in a more friendly manner in the new adaptation. They simply have more of a sympathetic Freudian Excuse backstory for their acts, without any of their sharp edges necessarily being softened. In which case the audience will have more of an understanding of why they're so hardened or evil in the present day.

Its inverse is Adaptational Jerkass.

A subtrope of Adaptation Personality Change. Compare Took a Level in Kindness (which is basically what this trope does to a character in an adaptation), and by extension contrast Took a Level in Jerkass.

Teen Titans GO!'s take on the otherwise most dreaded, malevolent, omnipotent villain in all of DC.

Teen Titans GO!'s take on the otherwise most dreaded, malevolent, omnipotent villain in all of DC.