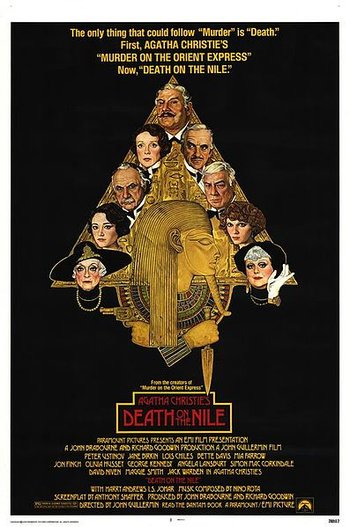 Death on the Nile is a 1978 British mystery film directed by John Guillemin, adapted by screenwriter Anthony Shaffer from Agatha Christie's 1937 novel of the same name. Nino Rota composed the score. Made following on the success of Murder on the Orient Express four years earlier, this was the first of six theatrical and television films in which Peter Ustinov played Poirot.

Middle-class Jacqueline "Jackie" de Bellefort (Mia Farrow) introduces her handsome fiancé Simon Doyle (Simon MacCorkindale) to her beautiful, wealthy friend Linnet Ridgeway (Lois Chiles). This proves a mistake, since within a short time Simon falls in love with Linnet. They get married and rush off on a honeymoon trip to Egypt, which culminates in a cruise up the Nile River aboard the paddle steamer SS Karnak. Unfortunately, a maniacally jealous Jackie follows along.

As it turns out, the boat is full of people who seem to be following Linnet and have a grudge against her or problem with her. Among the passengers are:

Sure enough, Linnet is murdered. The boat immediately pulls into port—no, just kidding, the boat keeps sailing up the Nile, as Hercule Poirot sets out to find the killer.

First of three screen adaptations of Christie's novel with a 2004 episode of the Poirot series with David Suchet and the 2022 film Death on the Nile by and with Kenneth Branagh.