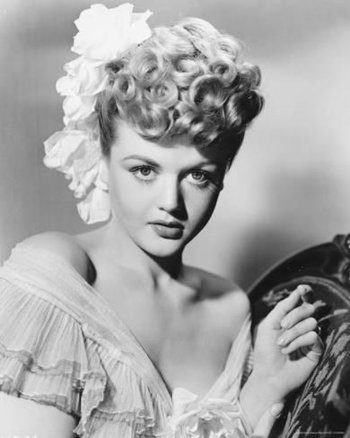 "I think of myself as a journeyman actress. I will attempt almost anything that I think that I can bring off. It could be almost anything."
Advertisement:

Dame Angela Brigid Lansbury (born 16 October 1925) is an English actress and singer whose career spans over seven decades on stage, screen and television.

Born in London, she moved with her family to New York City in 1940. Her first film roles were in Gaslight and The Picture of Dorian Gray (1945), both of which brought her Academy Award nominations for Best Supporting Actress. At age 20, she was (and still is) the youngest actress with two nominations. She went on to extensive work in film, on television and on the stage, eventually earning five Tony Awards (and two nominations), six Golden Globes, another Best Supporting Actress nomination and 19 Emmy Award nominations. In 1994, she was appointed a Commander of the Order of the British Empire by Queen Elizabeth II. In 2013, she received an Honorary Oscar for lifetime achievement.

Additional memorable film roles came in National Velvet, The Harvey Girls, Nanny McPhee, Bedknobs and Broomsticks, Beauty and the Beast, The Court Jester and The Manchurian Candidate. On Broadway, she won acclaim in Mame, Gypsy and Sweeney Todd. On television, she is best known as the star of Murder, She Wrote. She's the only individual to have an original song written for her from four of Disney's most famous songwriters: "The Age of Not Believing" from Bedknobs and Broomsticks (by The Sherman Brothers) and "Beauty and the Beast" from Beauty and the Beast (by Howard Ashman and Alan Menken).

Her paternal grandfather was British politician George Lansbury, who led the Labour Party in the 1930s. Her first cousin, writer and animator Oliver Postgate, created some of Britain's most beloved children's television programmes ever in the 1950s-70s, including The Saga of Noggin the Nog, Ivor the Engine, The Clangers and Bagpuss.

Despite being in her 90s, she's still going, folks. The great actor culling of 2016 didn't get her.

Emma Thompson apparently once threw a pie at her and Angela "spent the rest of the day throwing food at people", after bursting out laughing after being hit by said pie.

Her career provides examples of: