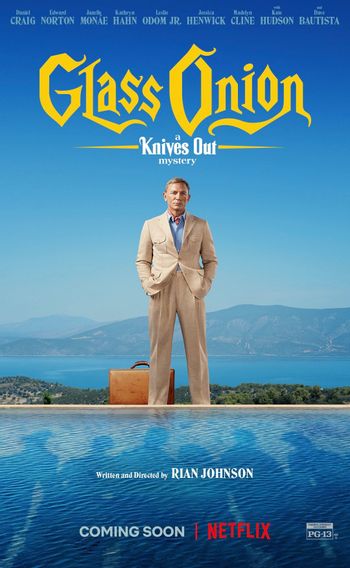 You're invited to put the pieces together.
"You expected a puzzle. But for one person on this island... this is not a game."
— Benoit Blanc
Advertisement:

Glass Onion (also known as Glass Onion: A Knives Out Mystery) is an upcoming 2022 murder mystery film directed and written by Rian Johnson. It is the follow up to, as if the subtitle didn't give it away, Johnson's acclaimed 2019 hit Knives Out.

The film is set to be released by Netflix on December 23, 2022 following a limited theatrical release in November of the same year. It also screened at the 2022 Toronto International Film Festival.

Glass Onion: A Knives Out Mystery contains examples of:

"Lock the doors. Stay in your rooms. Everyone is in danger."