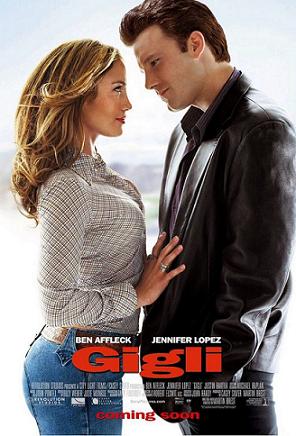 Gigli (pronounced "Jee-lee") is a 2003 romantic comedy film written and directed by Martin Brest, and starring Jennifer Lopez and Ben Affleck. It's notable for its swift change in direction: originally written strictly as a Black Comedy, it was rewritten to cash in on the Affleck/Lopez romance (then a major media craze) at the behest of executives.

Low-level Los Angeles mob enforcer Larry Gigli (played by Affleck) is commanded to kidnap Brian (Justin Bartha in his film debut), the mentally impaired, Baywatch-obsessed brother of a district attorney trying to bring down a mob lord and hold him hostage. Gigli's boss doesn't think he'll be able to handle the kid alone, though, so he has assassin Ricki (Lopez) join him. Gigli is attracted to Ricki, but she turns out to be a lesbian and, as such, rebuffs him.

Much of the remaining film time comprises the three hanging around Gigli's apartment, receiving threatening phone calls and break-ins from Gigli's boss and the police, and occasionally venturing to locales such as an outdoor diner and hospital, with strong emphasis placed on the romance between Ricki and Gigli and some rather strange lines. Oh, and Christopher Walken being Christopher Walken.

Not to be confused with Gigi.