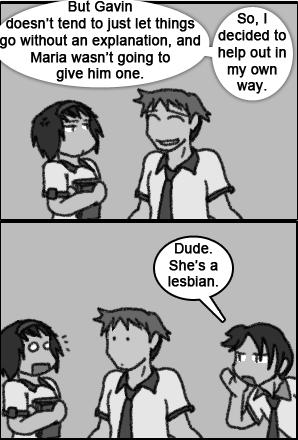 One night, at a party, The Casanova Bob meets his match with Alice. In spite of his flirting, charms, and a good romantic track record, she seems uninterested, and doesn't want to go out for a drink right after. He is confused, but he won't back down…

…until Carl kindly walks over and whispers to Bob, "Dude, she's a lesbian."

Dude, She's a Lesbian is when one person attempts to hit on another person, and a third person informs them of their Incompatible Orientation. This could lead to some awkwardness. Or not, if the flirting party is enough of a perv.

Besides the person informing of the Incompatible Orientation being different, there are several differences between the trope Sorry, I'm Gay. First of all, this could be said after Alice, a lesbian, walks away from Bob. Also, Alice could be in the closet, and only Carl knows her secret. Alternatively, Bob is the only one who doesn't know about Alice's Transparent Closet.

Obviously related to Sorry, I'm Gay, where the character directly informs the would-be suitor about the (real or feigned) Incompatible Orientation issue. Could overlap with All the Good Men Are Gay. Compare You're Not My Type, for situations that don't involve sexual orientation.