All the Good Men Are Gay 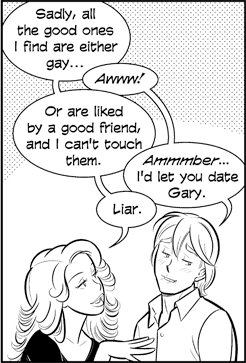 Okay, sometimes it's a little bit more complicated.
Connie: Oy vey, why do all the good ones have to be oy gay?
Maurice: It's a man's choice to be gay! Please respect a man's right to choose!
Connie: Yeah... Wait— What's that now?!
— Big Mouth, My Furry Valentine
Advertisement:

A woman looking for Mr. Right eventually finds a great guy with all the right things she's looking for—but it turns out he's homosexual, leading to the dismissive statement about straight men. This is loaded with the Unfortunate Implication that only (and all) gay men possess the qualities women want — tenderness, consideration, etc. — while heterosexual men are pretty much primitive cavemen or perverted jerkasses who don't know how to act in public and treat other people.

Ironically, there is no shortage of gay men saying the reverse: that all the good men are taken or straight, admiring the stereotypical positive traits of straight men (masculine mannerisms, straightforward with emotions, laid-back attitude, etc.). There's some Truth in Television here though; given human nature, healthy relationships are a seller's market—the most desired goods are either out of stock or otherwise unavailable for sale—on both sides. Not to mention people's tendency to make sly, humorous negative observations along the lines of Murphy's Law. Realistically, given the (alleged) percentages of straight and gay men in the human population, however, "All The Good Men Are Straight" is closer to an accurate statement than this trope's title.

See Forbidden Fruit if the fact that he's sexually unavailable to her only intensifies her attraction. Compare to Incompatible Orientation, where she may still love him despite his being gay. Also compare Sorry, I'm Gay where he may actually be straight and still trying to ward off her advances. Settled for Gay is this trope exaggerated and happens if the woman in question eventually gives up on straight men and prefers the company of gay men, even though she knows she will never be involved with any of them. This may be the attitude the Last Het Romance of a gay man takes after he comes out.