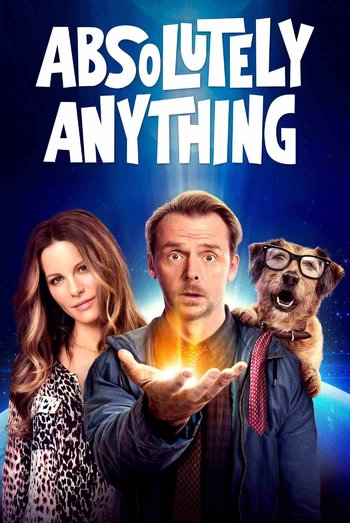 Absolutely Anything is a 2015 British Science Fiction Fantasy Comedy film directed by Terry Jones and starring Simon Pegg and Kate Beckinsale, with the voices of Jones, all four of his fellow surviving members of Monty Python, and Robin Williams in his final film role.

The Pythons play a group of aliens on the Intergalactic Council of Superior Beings. In order to judge humanity's worth, they give a random human omnipotent powers to see if he uses them for good or for evil - if it's good, they get to join the Council, while if it's evil, they destroy the planet. The powers go to down-on-his-luck schoolteacher Neil Clarke (Pegg), who begins to experiment with what he can do, including trying to win over his attractive neighbour Catherine (Beckinsale) and giving his dog Dennis (Williams) the ability to talk and advise him.