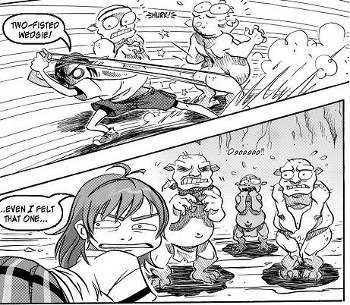 Two Fisted Wedgie: A wedgie so powerful, even girls can feel it.
"In the era in which this fight took place, turning a man's junk into cube steak was technically allowed in MMA rules. The referee practically had a nervous breakdown as he struggled against his instincts to stop this inhuman basket strangling. There was so much testicle damage being done that 20 years in the future, The Pedro's son was shrieking at his own hand while he faded from existence. The crowd booed and whistled and sometimes threw garbage because no one could agree on the proper social etiquette for watching a man legally kill a penis."
— Seanbaby, "The 6 Least Sportsmanlike Moments in MMA"

Commonly used in comedy series/movies, this is any instance where other male characters seem to sympathetically feel it whenever another male character has found himself to be the victim of a Groin Attack. Usually complimented by a loud groan and the cradling of their testicles, as if they had been hit there themselves. A common comment is "That's Gotta Hurt." You know it's bad when even the females can feel the male pain. It doesn't necessarily have to be a blow to the groin, however. A similar response can be made for another form of injury that looks suitably painful, such as a leg split, a belly flop onto water, or such.

Very Truth in Television. Want to know why men do that? It's painful. Almost every man experienced it at least once in their lives, and it's way simpler than losing a loved one. Unless you have nerves of steel, an extremely blessed life, or no empathy, it's almost impossible to not react to the pain you wouldn't subject to your worst enemies.

If the one delivering the kicks is an Action Girl, Tsundere or all of the above, part of the reaction probably comes from wondering if they're next.

Like Groin Attack, this is rarely applied to females in pain except comedically, but there are a few exceptions. The closest female equivalent is for mothers to wince during scenes of other women giving birth.

Contrast Instant Soprano, in which it's the victim of the Groin Attack whose reaction emphasizes its painfulness. Related to the same emotions present in Eye Scream. The Animals Fear Neutering trope is, in part, a byproduct of this one.

After Taiga's Groin Attack on her father, Ryuuji can be seen cringing and instinctively covering his own family jewels.

After Taiga's Groin Attack on her father, Ryuuji can be seen cringing and instinctively covering his own family jewels.