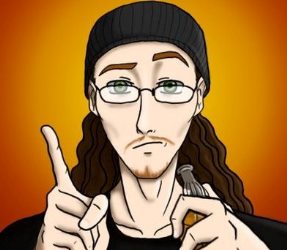 Matt Williams, a.k.a. Welshy, is a reviewer on YouTube and formerly on Channel Awesome, as well as a member of the Channel Awesome Wiki staff. He can be found here

. Always accompanied by a photo of Anne Hathaway, he does reviews with a focus on horror, like his Scream and Saw retrospectives, multiple Top 10 lists (often concerning Doctor Who) and two series called Why I Like... and My Problem With..., where he (quickly) goes into depth about something he does or does not like. Pretty straightforward really.

He is also the question giver on Sad Panda Q&A and has something of a drinking problem.

. He returned to internet video-making in October of 2014 on Phelous.com

with fellow former TGWTG contributor Sad Panda... and promptly stopped again on 2015, apparently having left the internet review biz for good, though has made a cameo here and there (such as Linkara's review for Future's End).