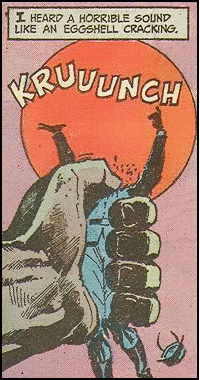 "The worst part was hitting the ground
Not the feeling so much as the sound."
— Barenaked Ladies, "Tonight Is the Night I Fell Asleep at the Wheel"
Advertisement:

If someone breaks a bone in fiction, usually they'll inform the other characters, and people will act accordingly. But sometimes, a writer may want to make the viewer or reader realize the character has been injured immediately, perhaps convey that it's serious or incredibly painful.

In TV, this means making the sound of a broken bone (crack!) a bit louder, frequently with the foley noise of a breaking stick or a stalk of celery. In literature, this means taking the time to describe the sound ("...with a sickening crunch"). It doesn't have to be a broken bone, either. Maybe a character's heart is struggling, and the viewer will hear that character's heartbeat from time to time.

This is a good way to make a Gory Discretion Shot still really unsettling.

Compare with Kung-Foley and Hell Is That Noise. May be a Stock Sound Effect.

Aunt Anna, accidentally steps on Fly, when he was turned into a fish... thankfully, the real Fly is alive and what she stepped on was a stuffed fish.

Aunt Anna, accidentally steps on Fly, when he was turned into a fish... thankfully, the real Fly is alive and what she stepped on was a stuffed fish.