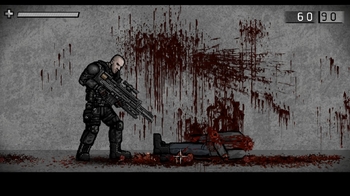 "It's all rated E from what I understand." note  This is one of the tamer mutilations in the game.

Leaden Sky is an upcoming side scrolling run n' gun shooter by Rozkurwiacz_czaszek. You play as a man named Kyle, and you kill enemies with many guns and some melee weapons. The main selling point of this game is a very detailed bodily damage system.

Leaden Sky is still in development, and the demo version is available in IndieDB page.

The first part of Update 5 was released in September 2020.