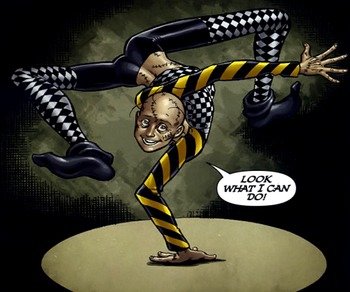 Someone who has the ability to rotate any part of their body beyond normal, which is either awesome or Body Horror.

Rarely goes with Losing Your Head or any other body part. Some robots have that ability, but when not on a robot, it occasionally falls under Blessed with Suck.

In Real Life this is generally a result of Hypermobility

Not to be confused for Head Turned Backwards. A specific sub-trope, for when only the head rotates, is Exorcist Head. For performers who bend far in the expected range, see Contortionist. If somebody's limbs get bent unnaturally-far because they've been stuffed or dragged into a too-small space, that's Fold-Spindle Mutilation. If a character uses this to spice up sex see Comic Sutra or Flexibility Equals Sex Ability.