Faster Than They Look 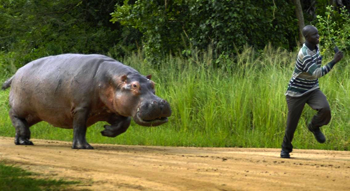 They aren’t called “river horses” for nothing.
Tyrion: Does he frighten you so much?
Bronn: I'd be a bloody fool if he didn't frighten me. He's freakish big and freakish strong. And quicker than you'd think for a man of that size.
— about Gregor Clegane, Game of Thrones
Advertisement:

So you meet this character. He looks slow somehow. Maybe he's so big, maybe he's so heavily armored, maybe he wields a big weapon, maybe his legs are too small, or he looks sickly and lethargic (or even a zombie), whatever. You'd expect to easily outrun this guy.

But then said so-called "slow" guy suddenly runs really fast! Bonus points if he's mad and is specifically going after you.

Despite the above, this can apply to vehicles and animals as well. Examples of exceptionally fast individuals of an otherwise slow animal species go under the Sub Speedy Snail. Trope Super-Trope to Acro Fatic and Impossibly Graceful Giant. Overlaps with Lightning Bruiser if the character can be mistaken for a Mighty Glacier at first glance. Contrast Glacier Waif, who's slower than they look.

Alternative Title(s): Faster Than You Look