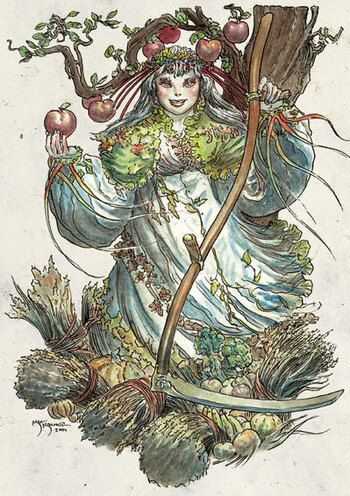 Chauntea, Goddess of Agriculture.
Tyrion: Why are all the gods such vicious cunts? Where's the god of tits and wine?
Varys: In the Summer Isles, they worship a fertility goddess with sixteen teats.
Tyrion: We should sail there immediately.
— Game of Thrones
Advertisement:

A Fertility God is a Stock God role whose job is to create, cultivate or nurture new life, or to help create conditions in which life can thrive.

They often overlap with a Love God and Food God, though not always. "Fertility" means a lot of things to different people and cultures, and thus it's not that uncommon for a god with a wider role to have "fertility" as only one of its spheres. A god wholly devoted to it is usually some type of Odd Job God except for a Proud Merchant Race, a society of Explosive Breeders, or an agrarian society, where they are often a Patron God or sometimes even promoted to Top God. Even a Proud Warrior Race understands that it's important not to piss off the god responsible for feeding its armies.

By default, almost every Earth Mother or Mother Nature spirit doubles as a fertility goddess, but Nature Is Not Nice. A Nature Spirit may spend millions of years cultivating an entire species, only to wipe them all out with a single natural disaster. A pure Fertility God will usually only advocate for the creation and reproduction of life; they may even be opposed to a God/Entity of Death or Destroyer Deity, and works will often contrast the two. If they succeed in upsetting the balance, the world may eventually face an Overpopulation Crisis or some other Green Aesop in which life itself overtakes the Earth like a cancer.

They may also double as a Hot God and Sex God, if hanky-panky is within their definition of "fertility". They may also be responsible for a Mystical Pregnancy or two, often helping a mother (or "father") become pregnant after a single intimate act, or sometimes even no intimacy at all, often with tons and tons of offspring. They may also be the person having a bunch of kids themselves, sometimes by many different partners.

Usually possesses Flowers of Nature, Fertile Feet or Fertile Blood, with more powerful versions capable of Green Thumb, Genesis Effect or World-Healing Wave powers as a function of their station.

Their worshippers are usually Nature Lovers or exhibit Purity Personified, and the gods themselves usually lean toward Light in a work that utilizes Light/Darkness Juxtaposition, with an alignment that can range anywhere from Lawful Good to True Neutral. Evil versions, however, do exist, and may be a Monster Progenitor or Mother of a Thousand Young.