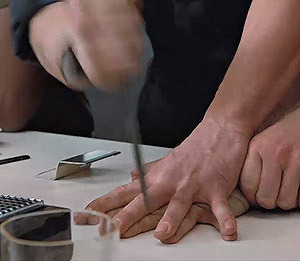 Oh, I have all my fingers, the knife goes chop, chop, chop, if I miss the spaces in between, my fingers will come off...
Bronn: There's a Braavosi knife game I can teach you.
Tyrion: Does it involve loss of fingers?
Bronn: Only if you lose.
— Game of Thrones
Advertisement:

The Five Finger Fillet is when a character places their hand palm-down on a table, spreads their fingers, and begins stabbing between them with a knife, trying to go as fast as possible without hurting themselves. Screwing this up, which gets easier as the "game" goes on, can certainly result in fingore.

This can be a way to establish a character as a hardened criminal or a Psycho Knife Nut, or just generally badass. However, if the work is farther to the silly side on the Sliding Scale of Silliness vs. Seriousness, it's more likely to be done by a character who doesn't fit the usual stereotypes, playing the contrast for humor.

The game is also called "the knife game", "nerve", "stabscotch", and "bishop".