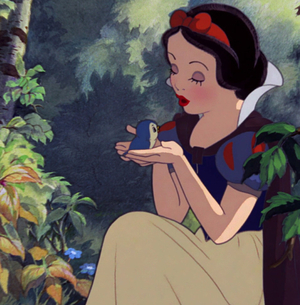 Why she becomes the "fairest of them all".
Advertisement:

Purity as a character trait is a very common concept in fiction. Going back to some of the earliest mythology, purity is treated as an ideal goal for everybody to strive towards. Purity is usually defined as a total lack of sin with an unrivaled dedication towards the ideals of the culture. In this sense, outside of deconstructions, purity is almost always analogous to goodness. It is often analogous to virginity as well, but not entirely bound to it. This can often go to supernatural lengths.

Going more in depth, a character with this trait (usually female, but male examples aren't that uncommon) is treated both by the narrative and by many (if not all) of the characters as being a shining example of good. Almost always beautiful, she often gives off a soft radiance that tends to attract animals. Almost exclusively soft-spoken, polite, optimistic, and just all-around pleasant to be around. The general message tends to be that this is a near-angelic person and should be given the utmost respect.

Tropes that often invoke this:

Add examples here of purity that don't quite fit in any of those articles: