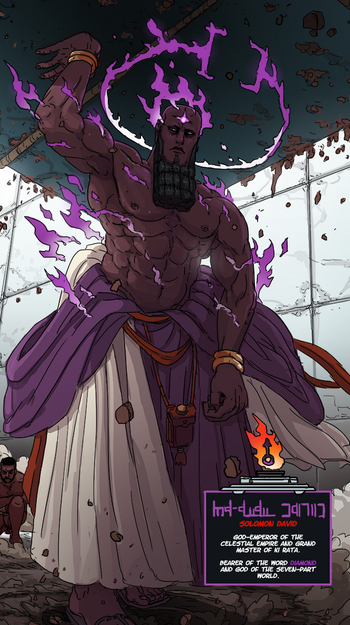 Boss: We're gonna have to do something about the pink.
Oleg: You'd prefer a more manly shade, like purple?
[Pierce, Shaundi, and the Boss all give Oleg approving looks]
— Saints Row: The Third
Advertisement:

This is purple being used to symbolize the power and/or coolness of a character, whether the character is badass, of Royal Blood, or something else.

This trope existed at least as far back as Bible Times, where the purple dye Tekhelet

was mostly limited to Tabernacle tapestries and high priests' robes in Israel thanks to how hard it was to procure— it could only be sourced from certain species of predatory sea snails. This more famously bled over into Phoenicia and The Roman Empire, whose own "Tyrian Purple"

could only be worn by government officials and the exorbitantly wealthy. Purple later became a common color for royal robes in Europe, where the legacy and romanticizing of Western Rome was deeply felt after its fall. It was also the color worn by cardinals of the Roman Catholic Church, before this was changed to the more familiar scarlet.

Some time later, purple became associated with either femininity, or fell on the evil side of Good Colors, Evil Colors (like The Joker). But for those that thought Evil Is Cool, it just helped purple be seen as a cool color. Then it became a stereotypical color for Pimp Duds, and it was definitely cool again. Can be considered a Yin-Yang Bomb when you consider that purple is red and blue combined.

This trope comes into play if it's clothing or an item on the cool or powerful character, whether it's a hat, weapon, or Badass Cape.

Nowadays, purple is often on the border of masculinity and femininity for the aforementioned reasons. If the latter comes into play, then this trope overlaps with Real Men Wear Pink.

Many Massively Multiplayer Online Roleplaying Games use a color coding system to convey the rarity and power of objects obtainable in the game. Worthless items are grey, uncommon ones are green, rare items are blue, and "epic" items — the most powerful items that the average player can hope to obtain — are purple. World of Warcraft does this, with most other MMOs following suit such that "phat purps" has become slang.

This is not just when any character who isn't a wimp wears purple. It has to represent power or coolness.

Incidentally, of all the visible colors on the color spectrum, violet has the highest frequency (courtesy of having the shortest wavelength), and thus the most energetic and most powerful, per photon.

Compare Gold Tooth, Graceful Ladies Like Purple (and can overlap with some Action Girls), Purple Is the New Black, Red Is Heroic, Blue Is Heroic, Heavenly Blue, Gold-Colored Superiority.