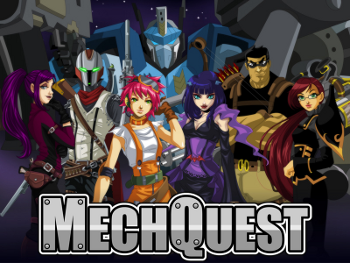 The online Flash game MechQuest is a "lunch break sized" RPG that takes place in the land of Lore. The game, though online, is single player, and uses online functions for updating the game very easily and for wars. For a one time fee, you can unlock all the features in the game. It is considered very literal prequel Reset to both DragonFable and AdventureQuest. The science-fiction story is based about the land of Lore- about 5,000 years prior to its precursor, AdventureQuest.

The main plot revolves around the Shadowscythe, an alien race trying to Take Over the World of Lore. Most of the wars and quests are related to the Shadowscythe and the on-going battle to protect their home-world.

For a one-time fee, you can become a Star Captain to buy more weapons, extra quests, more Planets, etc. Since this isn't a monthly fee, it can be worth it, but only if you have US$20 to spare, and are really into the game; otherwise, you're not paying for too much. You can also buy Nova Gems, whether you are a Star Captain or free player, for strong weapons, decoration for your star-ship, and improved mechas. They add very little to the game compared to Star Captain-ship. On the brighter side, you can find Nova Gems as a reward from watching Ballyhoo's ads, but not very often, and only in small packs. Though there is a rare chance of getting fifty in one go.

The game doesn't have only its simple fighting system to keep players enticed. Wars are special events to move certain Planet related plot-lines, where you enter a series of battles, each mecha you (and other players) destroy soon works toward a certain goal to fight the big Boss for some rare Event Items. You can find mini-games, though not many, in some quests. Your own space ship is a big feature, too. You can buy things for your space ship, including a arcade-style video game. The downside is that most of the things for your ship cost Nova Gems.

Sadly, the whole game is currently, for all intents and purposes, dead. Ash is unable to work on it anymore, due to lack of time and money.

This game can be found right here