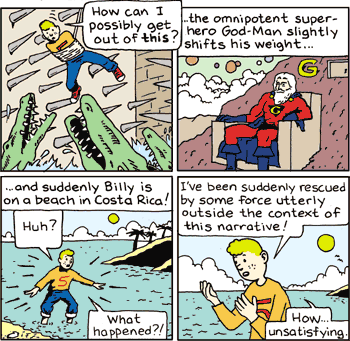 A Deus ex Machina (pron: /diːəs ɛks mækɪnə/ for Britons, /deɪuːs ɛks mɑːkɪnə/ for Americans; /deus eks maːkʰinaː/ in the orginal Latin) is when some new event, character, ability, or object solves a seemingly unsolvable problem in a sudden, unexpected way. It's often used as the solution to what is called "writing yourself into a corner," where the problem is so extreme that nothing in the established setting suggests that there is a logical way for the characters to escape. If a bomb is about to go off, someone finds a convenient bomb-proof bunker in easy reach. If a protagonist falls off a cliff, a flying robot will suddenly appear to catch them. A Million-to-One Chance of something occurring is accomplished by a bystander who didn't know what they were doing. If The End of the World as We Know It is about to happen and nobody is able to stop it, it will be stopped thanks to some scientist's otherwise useless invention.

The term is Latin for "god out of the machine" and originates in ancient Greek theater.note the original classical Greek "theos ek mekhanikos" became "deus ex machina" through Latin translations of Greek literary criticism in the Renaissance. It referred to scenes in which a crane (machine) was used to lower actors or statues playing a god or gods (deus) onto the stage to set things right, often near the end of the play. In its most literal interpretation, this is when a godlike figure or power, with all the convenient power that comes with that, arrives to solve the problem. A Divine Intervention need not always be a Deus ex Machina or the sole way this trope plays out however.

Note that there are a number of requirements for a sudden plot development to be a Deus ex Machina:

The concept eventually came back into vogue during the early years of the film industry thanks to The Hays Code. Villains, and anyone else who didn't toe the moral line, were absolutely not allowed to get away with their crimes. But, more often than not Evil Is Cool. The solution was to let the bad guy be awesome for the duration of the movie, then drop a bridge on them in the last five minutes.

Remember, even the notorious Deus ex Machina can be pulled off. Sudden resolutions are perfectly capable of leading to satisfying conclusions - see the entire "Rule Of X" series of tropes: Rule of Cool, Rule of Cute, Rule of Empathy, Rule of Fun, Rule of Funny, Rule of Romantic, Rule of Scary, Rule of Sexy (for those ever-so-fun Deus Sex Machinas), Rule of Symbolism, and especially Rule of Drama. Apparent Deus ex Machina also happen plenty in real life, given reality is far more complex and random than most fictionalized versions of it.

For more information about this Trope. See Only the Author Can Save Them Now.

Please make sure an example meets the criteria before submitting. This is not a place to Complain About Plot Twists You Don't Like.

As this is an Ending Trope, beware of unmarked spoilers!