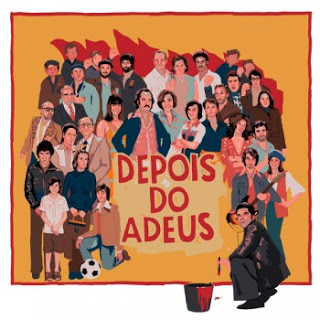 The official logo of the series
Depois do Adeus ("After the Goodbye", in English) is a Period Piece about the period after the Carnation Revolution (which happened on 25 April 1974) known as the Processo Revolucionário em Curso or PREC (in English, the "Ongoing Revolutionary Process") - thus covered the Revolution and immediate post-Revolutionary period, ending with the approval of a new Constitution and the democratic election of the first non-provisional President -, and more exactly about the Retornados (literally "the returned", as in "returned from the Portuguese colonies", but the majority of the retornados were actually born in the colonies or had lived there for so long that it didn't remind them of anything related to Continental Portugal).
Advertisement:

The series is centered on the Mendonças, a couple with two children, who "returned" to Portugal in July 1975, at the start of the Angolan Civil War, along with 500,000 other people. It tells us how the life of the retornados was in that period, and their interactions with those around them, who often were hostile to them.

The official site of the series