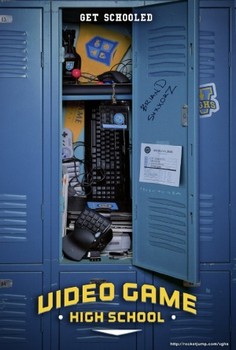 "Do you wanna hear about how the real world's the place for me?
Things looking out there won't look better on the TV screen.
Is there a better way?
I don't care what you say,
I just want to play!
We all just want to play!
Things will be alright,
soon as I get back to school!"
Advertisement:

is an action dramedy web series, and the first feature-length project from YouTube star Freddie Wong and his production company Rocket Jump.

In a World… where video games have become the most popular spectator sport, the only way to catch up to the improbably skilled professional players is to graduate from the eponymous Video Game High School. The story starts when young Brian D. finds himself catapulted into infamy when the next big star, known only as The Law, loses to him in a pub-stomp gone wrong. Now Brian has to put up with the pressures of high school, as well as the constant threat that any defeat could leave him expelled.

Ran for three seasons from 2012 to 2014, with episodes being released on RocketJump's site

. Each season was made with the help of crowdfunding; Seasons 1 and 2 with Kickstarter, Season 3 with Indiegogo.

The entire series is now on Netflix.