Beware the Silly Ones 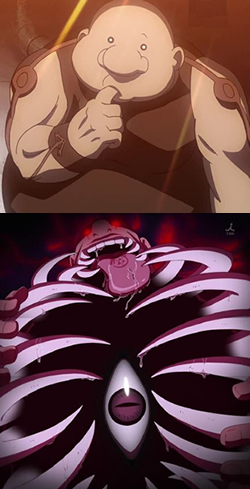 He'll go back to being adorable once he's through eating you.
Mr. Croup: You find us funny, Monsieur le Marquis, do you not? A source of amusement. Is that not so? With our pretty clothes, and our convoluted circumlocutions-
Mr. Vandemar: (murmuring) I haven't got a circumlo...
Mr. Croup: -and our little silliness of manner and behavior. And perhaps we are funny. [...] But you must never imagine, that just because something is funny, Monsieur le Marquis, it is not dangerous.
— Neverwhere
Advertisement:

So you've got a person who might fulfill the role of comedic relief. For the most part, both the fans and the characters in-story see them as just a great big doofus. Possibly, they spend more time acting ridiculous or laughing in the face of Serious Business than getting dangerous. Sure, they might rant up and down about how they're going to conquer the world in the name of Evil with a capital E or drive the villains to suicide through bad jokes, but in the end they seem to pose little threat to all present.

There's just one thing most people forget: acting silly does not mean you aren't a One-Man Army. The villain can be really dangerous despite being Laughably Evil; in fact, their silly nature may even add to their evil because of the unexpectedness of it. It could be a façade. It could be that they just do it for the lulz. Or maybe they are so badass that they find even the most dangerous scenario to be either just a joke or just a daily, normal thing. A well-hidden Berserk Button can be pressed. In any case, beware the silly ones.

Often achieved by way of Crouching Moron, Hidden Badass. Can be a variation of Underestimating Badassery. Compare Harmless Villain and Not-So-Harmless Villain. Also compare Fighting Clown. Contrast Miles Gloriosus. May overlap with Cloudcuckoolander, at least by appearances. Helps avoid having to Shoo Out the Clowns. If it's this same silliness that makes them dangerous, it may overlap with Success Through Insanity. May make you liable to Threat Backfire. See also Beware the Nice Ones if they're kind and caring and Beware the Quiet Ones if they're known for their near silence. In case the silly one is just acting silly and is actually downright serious, that's Obfuscating Stupidity. Offending the Fool might lead to this.