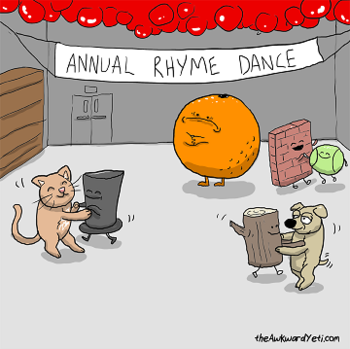 What about that door hinge at the back?
"When mired in a problem's confusion,
heed not to the boundary illusion.
So when rhyming with orange,
one has to be more inge-
nious to find a solution."
— Daniel F. Wallace
Advertisement:

When some person is expected to rhyme a word that has no rhyme in the dictionary. Orange is the word most commonly used for this; other allegedly unrhymable words in English include silver, purple, month, bulb, circlenote Fans of Family Matters might notice a potential rhyme between circle and a certain well-known character from that show — and others may see a very well known German politician in there – plus "purple" works well as a slant rhyme. and film.

This often is the consequence of them rhyming everything said by another character, who tries to stump them with something unrhymable. There are five conceivable outcomes:

Often, if they manage to make a rhyme, it will be an Ogden Nash-style Painful Rhyme, Rhyming with Itself, perhaps even a Mid Word Rhyme. Usually if the word is "orange", the rhyme will be "door hinge"; how well that works depends on your accent.

For anyone who's curious: the word "orange" is difficult to rhyme in the English language because it's of Persian etymology (a relative rarity in English), and entered the language later than most other words for colors. Before being a name for a color, it originally referred exclusively to the fruit, which (being indigenous to East Asia) didn't become widely known in Europe until the Middle Ages, when it was introduced by the Moors. Before the fruit's name caught on as a word for the color, it was likely called "red-yellow" or its equivalent.

Incidentally, many of these words do have rhymes, even without resorting to midword rhyme, slant rhyme, or a non-standard pronunciation for the speaker's normal accent. Orange has sporange (cell structure where spores are produced) and Blorenge (name of a mountain in Wales); silver has chilver (a female lamb); month has granth (Hindi for book, also a Sikh holy text); and purple has burple and chirple, if you're okay with reviving the obsolete suffix -le that means "frequently or tendency to" (eg. Same vein as "crumble" or "sniffle"). That's quite interesting, isn't it?

The song is preceded by a spoken word piece in which the singer calls his mother and asks for her help finding words to fit the rhyme. She offers "lima", but suggests he use a different word.

Alternative Title(s): Nothing Rhymes With Orange