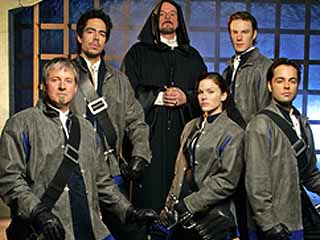 I wonder which one is the villain.
Jacqueline: Is catching a palace spy so boring?
D'Artagnan: Waiting to catch one is. I know a game we could play to stay awake.
Jacqueline: Oh, I know that game, too, and you’re the last man on Earth I’d play it with.
D'Artagnan: Huh. You’re the only man on Earth I’d play it with.
— "The Chameleon"
Advertisement:

A 2005 historical fiction / fantasy show that revolves around a team of Musketeers:

A victim of PAX's constant budget cuts and lack of audience, Young Blades ran for only one season of thirteen episodes and has no official DVD release.

Has an episode recap page.

Not to be confused with the 2001 movie Young Blades, starring Hugh Dancy, which featured young versions of the three Musketeers and D'Artagnan.