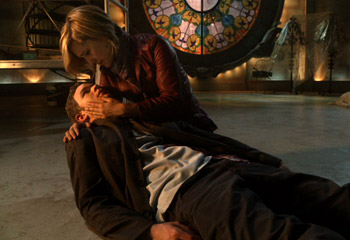 "I'm sorry... I love you."
V: I fell in love with you, Evey, like I no longer believed I could.
Evey: Then I don't want you to die!
V: That's the most beautiful thing you could have ever given me.
— V for Vendetta
Advertisement:

Death seems imminent for a character. Her grief-stricken Love Interest who has been doing the Will They or Won't They? sidestep with her decides that he'd better come clean with his feelings for her or else he'll have to live with the thought of never having said it to her.

In other cases, it's the dying person who confesses her love. Apparently, looming death is the best time to make those tragically intense romantic declarations that you cannot spit out when your love is healthy and you are, too.

At least half of the time, Murphy's Law holds that he/she will make a miraculous recovery after the confession and try to back out of what they just said. (A Last-Second Word Swap may be required to keep the Will They or Won't They? situation alive.)

Has a 50:50 chance of being subverted nowadays, but far from being a Discredited Trope. Common subversions include the confessed-to becoming irritated that it took a death threat for the confessor to finally overcome his Cannot Spit It Out problem, the dying person faking it, or helpfully pointing out that the death bed is not the most ideal place to say those words. In some cases, the person who's about to die (or otherwise lose any chance of being with his or her beloved) will consider doing this, but decide not to for certain reasons, such as not causing undue anguish to the person he or she is going to leave behind, making this an Aborted Declaration of Love. The inversion is the Dying Declaration of Hate.

A kinkier variation of this is the "we're going to die tomorrow, and I don't want to die a virgin" mindset.

Formerly known as Going Down with the Ship, which has now been reappropriated for the traditional (and more literal) use of that phrase.

See also Now or Never Kiss, with which this trope has some overlap.