Series / You're in the Picture 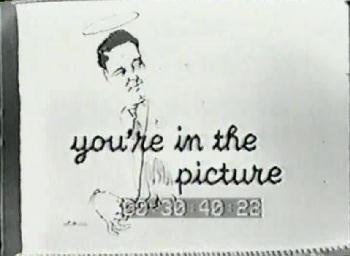 The title card from the premiere episode.
Game Show hosted by Jackie Gleason for CBS in 1961 where four panelists (Pat Harrington Jr., Pat Carroll, Jan Sterling, and Arthur Treacher) stuck their heads into a scene and had to guess what it was based on Gleason's responses to their questions. The panelist who guessed the scene got 100 CARE packages donated in their name, while the packages were donated in Gleason's name if nobody got it. The series was sponsored by Kellogg's and L&M Cigarettes, with Dennis James pitching some commercials for the former.
Advertisement:

A week after its January 20th premiere, Jackie Gleason aired an on-screen apology for making the show (part of this apology can be seen here

). Gleason finished out his network commitment with a one-on-one informal talk show entitled The Jackie Gleason Show, which ran until March 24.