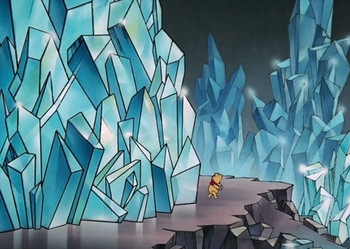 Not what Pooh meant by "going to Silicon Valley".
"The crystal trees among them were hung with glass-like trellises of moss. The air was markedly cooler, as if everything was sheathed in ice, but a ceaseless play of light poured through the canopy overhead. The process of crystallization was more advanced. The fences along the road were so encrusted that they formed a continuous palisade, a white frost at least six inches thick on either side of the palings. The few houses between the trees glistened like wedding cakes, white roofs and chimneys transformed into exotic miniarets and baroque domes. On a lawn of green glass spurs, a child's tricycle gleamed like a Faberge gem, the wheels starred into brilliant jasper crowns."
— J.G. Ballard, The Crystal World
Advertisement:

This is the area composed mostly — if not entirely — out of crystals and gemstone minerals. They may be protruding from the ground and could have been placed there by people or formed naturally. Such landscapes usually possess magical properties in one form or another, whether created through the Applied Phlebotinum of advanced societies or through the innate magical energy of a landscape.

Given that many types of gemstones can be found in caves, this trope often overlaps with Underground Level and Beneath the Earth, as well as areas connected to earth-based Elemental Powers. This sort of landscape is also likely to be found in alien settings, whether extraterrestrial or extradimensional, as a way to emphasize their exotic and unusual natures. Occasionally, this may also be used as a sparklier version of The Corruption, especially when the crystals are given the ability to spread, and portrayed as a sign of some alien or malignant force spreading over the mundane world.

If made with evil intentions, it could be made as a form of Crystal Prison. Expect entities native to the area to be Crystalline Creatures and use Gemstone Assault.

Cousin to the City of Gold.

Acorn Plains-2: Tilted Tunnel is a cave with plenty of crystalline platforms.

Acorn Plains-2: Tilted Tunnel is a cave with plenty of crystalline platforms.