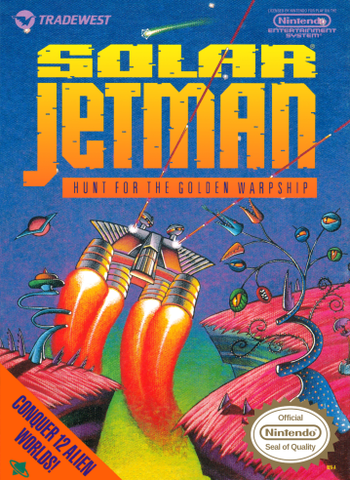 You are a member of the Federation of Space Loonies. Your task is to find the pieces of the fabled Golden Warpship that have been hidden across four solar systems by space pirates... or something.
Advertisement:

Solar Jetman: Hunt for the Golden Warpship was made by Rare in 1990. Despite having a major article in Nintendo Power volume 18 (and a Howard and Nester comic about it a couple issues later), the game did not get much praise. Or much attention at all for that matter. In fact, Rare had plans on porting the game to other systems, but the idea got scrapped late in the process due to low sales.

The game itself is very well made, considering the technology of the day. The graphics are clear, the physics are quite accurate, and each planet is unique enough to keep the player from getting complacent.

In essence, each planet is a small Wide-Open Sandbox, as you can go anywhere and do anything you wish, though the primary goal is the same: refuel your mothership, find the wormhole and retrieve a piece of the Golden Warpship. Anything else you do to gain an extra credit or two is completely optional, though that can be part of the fun sometimes (especially finding out what's inside that treasure chest you found).

The list of planets and their given statistics are as follows: