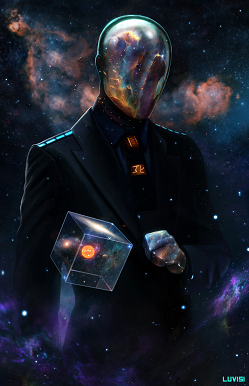 Thinking far outside the box.
Advertisement:

Another Dimension that is not so "other", Pocket Dimensions are spaces that are too small or too easily accessible to be truly considered a separate dimension and are referred to as a small extra pocket of space that is attached to our own. Much like an actual pocket, they are often used for some extra space where you can get things Bigger on the Inside. A Speculative Fiction favourite, the uses are plentifold. Storage for a Bag of Holding, hiding places, transportation, an explanation for physics-defying superpowers: a Pocket Dimension can do them all. Can't make julienne fries though.

Also can serve as a (sometimes unstable) Small, Secluded World with its own ecosystem and lifeforms. This is a quite handy place for keeping some nasty lurksome monsters; it lets them be very alien and make intermittent contact.

See also Just One Second Out of Sync which is often exactly the same but explained in terms of a temporal fashion than a spatial one.