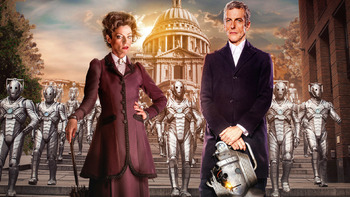 The good man versus a wicked witch, and her army of flying Cybermen pretties.
Click here to see the Radio Times magazine poster for this episode: 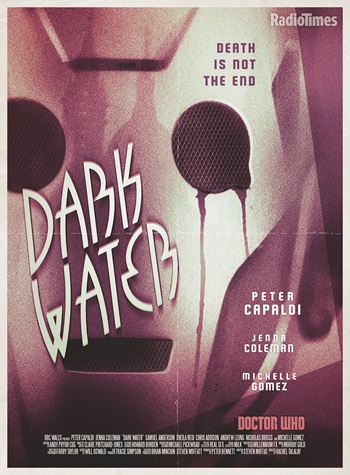 Death is like a pool of black water. You can't see past the inky surface. Perhaps there are things lurking beyond it... things you shouldn't see.
The Doctor: This is it, Clara, one of those moments.
Clara: What moments?
The Doctor: The darkest day, the blackest hour. Chin up, shoulders back — let's see what we're made of, you and I.
Advertisement:

The one where Danny Pink didn't Splink.

Written by Steven Moffat. Part 1 of the two-part finale to Series 8.

This week, we're probably going to Heaven! Please don't hang your head and cry. But wonder why...note Yes, this was intentional, you'll see...

After eight episodes of trying to hold a masquerade together, Clara's finally decided to fear less, trust more, and tell Danny over the phone about all her adventures throughout time and space. And that she loves him — she truly, properly loves him, and won't ever say those three words to anyone else again. That's a distracting thought. That's a very distracting thought, when you're walking into the middle of traffic.

Then Danny stops talking. Then a woman picks up the phone, audibly shaken. There was a carnote A later novel reveals it was actually Missy in a milk float, and it came so quickly...

So, Clara just heard her boyfriend die over the phone. Understandably, she's a little out of sorts. Just a touch. Fortunately for her she has options, namely the other man she's admitted to being in love with. However, since she knows full well the Doctor will never simply go back in time to save Danny, she waits until the next time comes round to call, before having him fly her over to a volcano, drugging him and stealing all of his TARDIS keys. Even the one in his pocket and the one in his copy of The Time Traveler's Wife (though she missed the one in the cubbyhole over the "P" of "Police Box".) You see, lava can destroy a TARDIS key. If the Doctor doesn't go back and save Danny (and yeah, saving a companion's loved ones, that went super well last time), he'll never get inside the TARDIS again.

Notwithstanding the fact he can simply snap his fingers to open the doors, the Doctor anticipated Clara's actions; staring her down while she destroys every last TARDIS key in grief (remember, threats are meaningless unless you go through with them.), he reveals that she wasn't able to drug him, but instead drugged her in retaliation, making her think they landed at at a volcano. And while understandably pissed off that she betrayed him, he asks if she honestly thought that he cared so little about her that betraying him would make a difference. Asked what he wants of her, he tells her to "go to Hell". Clara of course, thinks he's leaving her for good, but fortunately, he means literally. Off they fly, using the TARDIS's glowy telepathic hand warmers, to find whatever afterlife Danny may have gotten stuck in. And the TARDIS seems to think he’s somewhere…

The Doctor and Clara arrive at 3W, where skeletons are encased in water tanks. They finally meet the mysterious Missy and the Doctor devolves into a stuttering mess at the sight of her. He's definitely not ready to admit to himself who she is, though... so she promptly pushes the Doctor up against a wall and snogs him into complete incoherence. Missy reveals herself to be a droid (a "Mobile Intelligence Systems Interface") and pulls the Doctor's hand against her chest so he can feel her android heart. When she (hammily) storms off to introduce her guests to her techie, Dr. Chang, the Doctor's hand lingers in the empty air, and he has the most concerned look on his face, as though her heartbeat revealed something entirely different...

Meanwhile, Seb introduces Danny to a guest who's come to see him. Not Clara, but the reason for his PTSD: as it turns out, Danny accidentally killed a young boy while he was in the army. The two very uncomfortably stare at each other before the kid dashes off again in panic.

Dr. Chang explains to Clara and the Doctor what 3W does: the institute seeks to preserve the bodies of the dead, since a bunch of very clever scientists realised that dead people feel whatever their bodies feel when they decay. Chang also demonstrates the eponymous "dark water", which conceals any inorganic matter that's submerged in it. And the static on your television set, that odd white noise throughout the ages, is nothing but the dead crying out — "Don't cremate me!" After Seb relays this information to Danny as well, Clara is able to speak to Danny using an iPad (of course they have iPads in Heaven — they have Steve Jobs!) and Danny soon realises that Clara intends to follow him all the way to the afterlife.

The Doctor soon finds out that the "dark water" surrounding the skeletons is hiding the fact that they're all encased in Cyberman armour. And once Missy sadistically kills Dr. Chang, and turns out to be not actually a droid and actually the CEO of the institution, the Doctor confronts her about other very unexpected things... such as the fact that her falsified Heaven is really obviously a knockoff of the Gallifreyan Matrix, the network that stores the minds of all dead Time Lords. Modified to contain humans. Also, Missy has a double heartbeat, which she revealed to the Doctor when she pulled his hand against her chest. The Doctor freaks right out and runs like hell from her, still not willing to admit to himself who Missy is. Out on the streets, 3W turns out to be dimensionally folded into St. Paul's Cathedral, and the army of Cybermen is already making its way down the steps. Which is when Missy, fed up with the Doctor's refusal to realise her identity, finally tells him... okay, remember the Scissor Sisters lyrics at the top of the page? If you haven't figured it out yet, let Missy confirm it.

“Try to keep up. I’m Missy. Short for Mistress. Well... I couldn't well keep calling myself 'the Master', now could I?"

The Doctor backs away slowly in a mixture of terror and disbelief, very agape and letting out a gasp. While he's not shown much fear thus far in this incarnation, this is the first time he's positively horrified - everyone's favourite Gallifreyan sociopath and the universe's resident evil cockroach is back. The Cybermen march in sync on their latest invasion out of the Cathedral, and steadily close in for the kill...

And Danny knows that once Clara is sure that it's really him, she'll follow him right into death. So he says nothing but "I love you", over and over, until she's convinced he's not real. Seb gives him a very handy little button that will DELETE all those pesky emotions. Danny is reduced to a crying wreck after pushing Clara away for her own good, and in a distraught state, is dangerously tempted to press the button. But the little boy he killed steps forward, almost as if to intervene...

"You know the key strategic weakness of the human race? The dead outnumber the living."