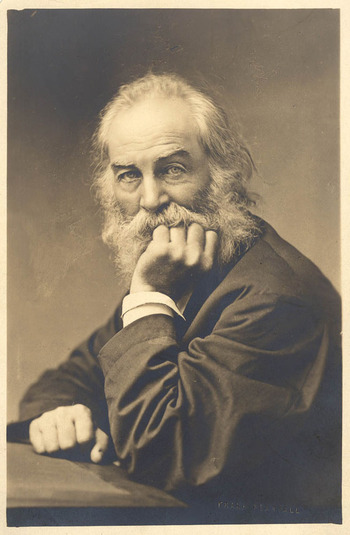 Photographed by G. Frank Pearsall c. 1869-1872
"It is a beautiful truth that all men contain something of the artist in them. And perhaps it is the case that the greatest artists live and die, the world and themselves alike ignorant what they possess."
— Walt Whitman, Talk to an Art-Union
Advertisement:

Walter Whitman (May 31, 1819 – March 26, 1892) was an American poet, essayist, and journalist probably best known for his revolutionary book Leaves of Grass. His work has elements of transcendentalism and humanism, and his poetry greatly influenced all the poets that came after him.

Also notable because of continuing debates about his sexuality and because of the mad love The Beat Generation had for him and his wandering ways.

A native of Suffolk County on Long Island who began his career in Brooklyn, he is also revered as a local great in Washington, D.C. (where he served during The American Civil War as what amounted to what we would call today a hospice/palliative care nurse to Union soldiers; his recitations of poetry, including his "weird" free verse stuff, proved a great comfort to many of the wounded, maimed, and dying; a quote about this experience is engraved on the Dupont Circle Metro stop) and in Camden, New Jersey (where he spent his last years; they named one of the bridges connecting Philadelphia to New Jersey

, not far from Whitman's final home, after him).

You probably know him for his poem about Abraham Lincoln, "O Captain, My Captain".

Whitman was a fierce proponent of democracy and egalitarianism. He was known to ride the bus, sitting up front quoting William Shakespeare to the driver.

Works featuring Whitman as a character

His work features these tropes: