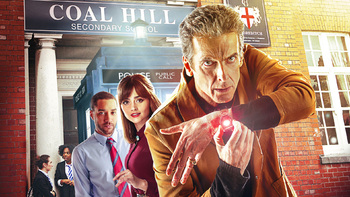 Trust him — he's the caretaker.
Click here to see the Radio Times magazine poster for this episode: 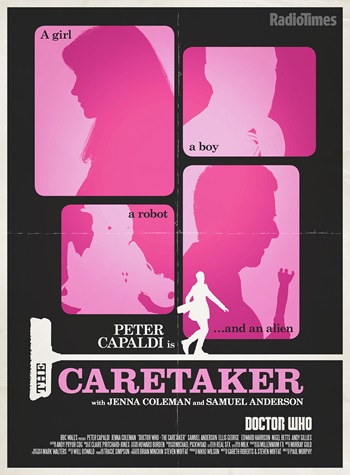 ".
"So, if anybody needs me just, you know, give me a shout. I’ll be in the storeroom just getting the lie of the land. Yes, nobody’s taking any notice at all. Absolutely good news because it means I must be coming across just as an absolutely boring human being like you. Deep cover, deep cover."
— The Doctor
Advertisement:

Clara Oswald is a woman of two lives. She's a mild-mannered (OK, not that mild-mannered) English teacher at a secondary school in Shoreditch — Coal Hill and also Danny Pink's girlfriend. She's also the Doctor's companion, professional intergalactic traveler, self-admitted "carer"/walking external conscience and question-asker, who has to zip off every now and again for fun adventures with Fish People, or rather less fun adventures where she almost dies in the desert.

Anyway, all that's fine, and she can handle it; honestly she can, as long as nobody ever actually meets. The Doctor can stay in his box, and Danny can stay in the normal world with normal people, and that's all going to stay fine. Although, the Doctor's had to cancel their weekly trip this time — he's hiding, somewhere he won't tell her, going into deep cover. Clara's not entirely sure he can do deep cover, but, never mind — it gives her more time to work on things with Danny, who's starting to catch on to Clara's sudden tans, seaweedy moistness or changes of clothing.

Then "John Smith" shows up at Coal Hill, introducing himself to the staff. He's the caretaker now (caretakers are cool) and you can just call him "the Doctor".

He's got a different jacket on, though, so that's deep cover.

Clara promptly goes into panic mode, but by then an adventure's already happening — the Doctor's hunting a Skovox Blitzer, an alien robot superweapon packing enough heat to take down the planet. Sure, they can save the world, but can Clara save her secrets? What's gonna happen if Danny Pink finds out?